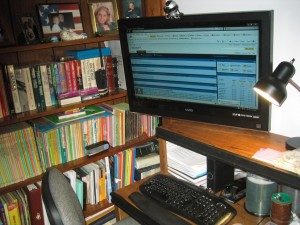 I recently lost my computer monitor.  Well, I didn’t really lose it, it died.  I guess leaving it on 24/7 isn’t “green” or good for the ‘Ol monitor either.  The monitor was a Hewlett Packard 22 inch flat wide screen LCD HDMI monitor which I thought was pretty nice.  She was only approximately two and a half years old when she passed away.  To lessen my environmental impact, I utilized e-waste recycling to get rid of the old thing!  When shopping for a new replacement, here is what I found.

First of all, monitors over 20″ aren’t much cheaper than they were two years ago.  Not willing to accept anything less than what I had, I found that the best prices on 23″ monitors(22″ monitors are now called 23″”) ran from a very cheap looking, no frills, Samsung at $209 to some other not as cheap looking brands up to $399.  The comparable HP replacement monitor is $269 to $299 depending on where you find it.  Most common comparable replacements I found to be at about $249 -$329.

As I was about to make my choice, I met a very helpful and knowledgeable guy at Sam’s Club.  He happened to be a manager and told me about another option.  How about replacing your monitor with a HDTV?  Not only can it be set up as a monitor, but it can also be used as a HD television by simply toggling back and forth.  Set up is as simple as it comes.  Nothing complicated at all… and LCD flat screen HDTVs are a whole lot cheaper than they were two years ago.  With a wide selection of HD flat screen TVs at Sam’s Club and at Best Buy,  I was able to find a larger 32 inch screen HDTV set for less than $60 more than the 23inch monitor I was about to buy.  I found a Visio 32 inch …  yes, “Thirty-two” inch LCD HDTV for $338.. They also had a Visio 26″ for only $328, but for ten bucks I couldn’t pass on six inches more.  My wife even agreed that was a good deal! (OK, get your head out of the gutter!)  I chose the 32 inch Visio.  To see it (click here) 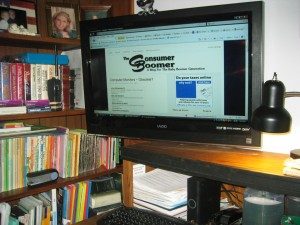 Consumer Boomer On the TV Monitor

Five Stars!!! Works perfectly and it is UNBELIEVABLE, AWESOME, SWEET, or what ever they call it now.  It was a “Best Buy” at “Sam’s Club”

None I can think of

Next step … Hook the computer up to my 55″ big screen.  Add a cordless keyboard and mouse.  Sit on the couch.  Watch TV.  Play on the computer.  Drink beer without having to get up.  Papa B!