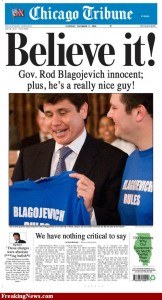 Chicago politics, don’t ya just love it!  It sure has given the news media plenty to report on in the last few weeks.  I hesitate to waste too much time trying to further explain this arrogant boob’s blunders of the past.  But, being from Illinois, it was no surprise that he was under investigation.  It was no surprise that he has multiple corruption complaints against him.  The bigger surprise is that he hasn’t already been put in jail or already been impeached in the past.  He actually got re-elected after his first term of the same stuff!  I don’t know anyone in this state outside of Chicago that doesn’t absolutely despise him.  He has been a stumbling block to the progress in the State of Illinois since he took office.  The biggest accomplishment in Illinois government for the last six years will be the impeachment a sitting governor before he goes to jail like the last one.

Who could have Known?

An easier question to answer is “Who couldn’t have known?  The simple answer to that is nobody in Illinois politics.  I do mean nobody.  Not all of our representatives and senators are guilty of corruption or are dishonest, but all of them, Democrat and Republican alike, either had to know what was going on or are just plain stupid.  This includes President elect Barrack Obama, and I don’t think for a minute he is stupid.  Let’s face it Obama was on the committee to re-elect Blagojevich.  Blagojevich’s best buddy and strongest ally Emil Jones of Chicago was the person who most people in Illinois believe made the previously inexperienced Obama a senator through his tight political connections.  And then there is Raum Emanuel, the expert on how to get it done, no matter what it takes, from Chicago’s 5th district.  How could Obama or anyone else in Illinois politics possibly be unaware of Blagojevich’s tactics?  But it does not stop there.  It is all of them!  You can call it bi-partisan stupidity if you like, I just to call it more Chicago politics.  In Illinois we are very used to it.

What about Roland Burris? Roland Burris has a respectable record in Illinois politics.  I would have been very satisfied to see him appointed to the position of Junior Senator of Illinois up until the time he accepted the appointment from Rod Blagojevich.  At that point I believe he compromised his own credibility and integrity.  A couple of things bother me about this.  Number one, according to his good friend Secretary of State Jesse White, prior to his appointment by Blagojevich, Burris took the position with Jesse White and Congressman Bobby Rush that Blagojevich should not have the authority to appoint a new senator to Obama’s vacant seat and any appointments made by Blagojevich should

not be accepted.  Then, when it was him that was to be appointed, he switched his position completely up to and including threatening law suits to get himself seated.  It was at that point that his motives became questionable.  Secondly, even though he later denounced any racist motive by the U.S. Senate, he allowed the race card to be played by his close ally (Bobby Rush and friends) without recanting anything up to the point it looked like he might actually be seated by the U. S. Senate.  It now seems personal motive is the rule of order with Burris and Blagojevich.

Chicago may not be the largest city in the U.S. but, Illinois is still #1 at something!

For much more on the subject of Click Here!