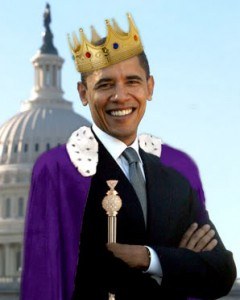 The U.S. now has more Czars (31+ and growing) than Russia did (18) in it’s entire 400+ year history.  Who needs Congress?  More than 31 appointees by Barrack Obama into extremely powerful positions reporting directly to him without any Congressional hearings, approval, or oversite.  The first Czar appointed (the “Car Czar”) has now resigned under clouds of fraudulent activities.  We have a Pay Czar, Energy Czar, Green Jobs Czar, Urban Affairs Czar, Technology Czar, Great Lakes Czar, Information Czar, and Climate Czar, just to name a few.  Today he appointed a Science Czar.  “We even have a “Faith Czar”!   What about separation of Church and State?

I pledge allegiance to the flag of the United States of Obama?  This is unprecedented control by any single President, King, or Dictator.  I ran across this blog about Obama’s Czars.   It seems that Obama has done in a few months what Russia couldn’t do in 400 years.  Interesting, alarming, and worth the read.  Click on the following link ROMANTICPOET’S WEBLOG.  Is this the United States or Russia?